The data allow a new view of the regional structural and stratigraphic relationships and deep crustal structure across the passive margin of Atlantic Morocco. In this way they provide a new framework for petroleum systems analysis in guiding future exploration. The seismic data also tie key exploration wells and DSDP sites allowing the extrapolation of stratigraphy and source rocks across the margin. In a supplementary study, ‘Eastern Atlantic Oceanic Crust Project’, Subsurface Resource Consulting/Integrated Geochemical Interpretation (SRC/IGI) have re-evaluated the biostratigraphy and organic geochemistry of DSDP sites 136, 137, 369, 370, 415, 416, 545 and 547, offshore Morocco.

Figure 1: Seismic Line extending from the basin margin in the south across the deep basin with its diapiric salt and onto oceanic crust. It shows the Jurassic carbonate platform with underlying syn-rift section, Cretaceous extensional hinge-line, extent of mobile salt, oceanic crustal deformation of Cap Tafelney Foldbelt, the regional Base Tertiary Unconformity and key DSDP control points. 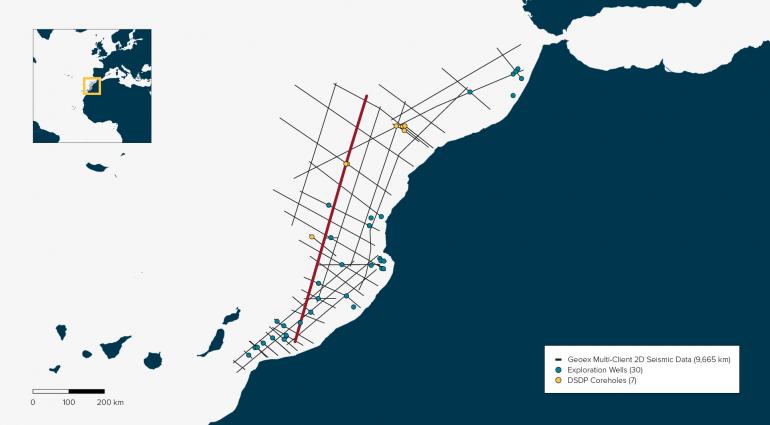 The data provide new insights into the Late Cretaceous-Tertiary crustal deformational history of the margin extending between continental and oceanic crust. Neumaier et al.’s (2016) Base Tertiary Unconformity (BTU) is clearly seen on the new seismic data (Figure 1). DSDP borehole control (415, 416 and 370, all drilled on oceanic crust, see Figure 2) show that the oldest sediments overlying the unconformity are Paleocene in age. The time gap of 30 to 40 million years (Paleocene to Mid-Late Cretaceous) has been attributed to a depositional hiatus by Neumaier et al. but the unconformity’s truncational nature on seismic (seen strongly down-cutting to the north on Figure 1) attests to a period of widespread uplift and erosion (Figure 3). Vitrinite reflectance data from DSDP 397 (also drilled on oceanic crust) indicates that there could be kilometres of missing section at this unconformity. This is why we have labelled the BTU the ‘Atlantis Unconformity’ (see Figure 3).

The Late Cretaceous timing corresponds to the first shortening in the Atlas system in response to the onset of convergence between Africa and Eurasia. This was attributed to large-scale buckling of the lithosphere by Frizon de Lamotte et al. (2010) and on this evidence lithospheric deformation has affected both continental and oceanic crust. It also corresponds to a phase of Late Cretaceous-Paleocene ‘passive’ uplift and shallowing/emergence on the oceanic islands of Fuerteventura (Canary Islands) and Maio (Cape Verde Islands) (see Patriat & Labails 2006). 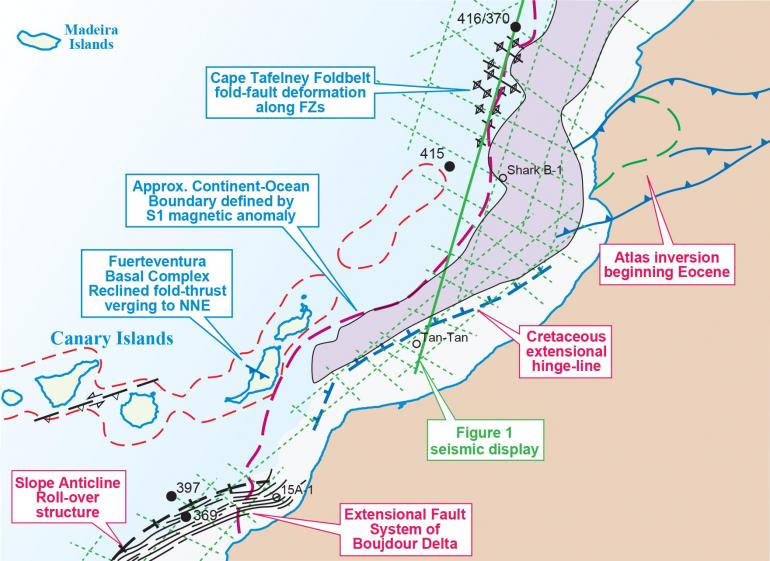 Figure 2: The main structural and crustal elements of the Central Segment of the Moroccan Atlantic Margin including the Cretaceous extensional hinge-line, salt province, continent-ocean boundary and the Cap Tafelney Foldbelt. The new 2D seismic coverage and key DSDP sites are shown.

The new seismic data confirm that the Cap Tafelney Foldbelt (TFB) (see Figures 1 and 2) is a product of oceanic crust deformation (OCD). The structural fabric of oceanic crust consisting of spreading-ridge ‘rift’ faulting and the ‘ridge-and-furrow’ geometry of fracture-zones is imaged on the new data. The data show that the TFB was formed by compressional reactivation of fracture-zone structures deforming the overlying sediments in short-wavelength reverse fault-fold structures and also in long-wavelength folds or buckles. DSDP core-hole ties indicate that the main deformation occurred between the BTU and the Miocene but the effect of late broad folding can also be seen at seabed. Neumaier et al.’s north-to-south diachroneity of the folding is not apparent on the new data.

Oceanic crust deformation is also seen on Fuerteventura Island where an overturned Jurassic-Cretaceous sequence lying on oceanic crust forms the limb of a NNE-verging overturned fold (Figures 2 and 3). Timing of the deformation is reported to be Oligocene (Gutierrez et al. 2006) and was therefore temporally coincident with TFB deformation and with the main Atlas inversion. The new seismic data confirm that there is no direct tectonic link between the Atlas and the OCD of Fuerteventura and TFB indicating that oceanic crust has deformed independently of continental crust during this phase of Africa-Eurasia convergence.

Over the last 20 years exploration wells have unsuccessfully drilled Upper Cretaceous/Tertiary, Lower Cretaceous and Jurassic reservoir targets offshore Moroccan Atlantic. The latest phase of exploration (~10 years) has seen wells drilling deep targets in Lower Cretaceous clastics and Jurassic carbonates. For this exploration, reservoirs with trapping potential were identified on seismic data (often de-risked by AVO/amplitude anomalies) and potentially charged by known Mid Cretaceous source rocks. The lack of significant exploration success begs questions about the effectiveness of the petroleum system(s) associated with these source rocks. Time therefore for a re-assessment of the exploration potential in the context of a new regional geological understanding.

Direct evidence for source rocks in the ‘deep’ section of the distal domain comes from DSDP information (which can be extrapolated with the new seismic data) and the outcropping Mesozoic section in the Basal Complex of Fuerteventura, Canary Islands. SRC/IGI have analysed sediments for geochemistry from Fuerteventura and shown that there was an original source-level organic content and richness in the Middle/Upper Jurassic sediments.

Evidence for petroleum systems associated with Jurassic and Lower Cretaceous source rocks is provided by the hydrocarbons encountered in Jurassic carbonates along the Tarfaya margin and DSDP drilling. DSDP Site 397, offshore Boujdour, encountered unusually high quantities of thermogenic gas and gasolines. Compositional and isotopic trends are consistent with diffusional migration from a deeper mature source rock or top-seal leakage from an oil/condensate accumulation. Either way ‘deep’ Lower Cretaceous or Jurassic source rocks are implicated in the petroleum system.

Well CB-1, drilled southern offshore Boujdour in 2015, encountered gas and liquid hydrocarbons in a roll-over structure, demonstrating that kitchens for Jurassic and/or Lower Cretaceous source rocks have formed on oceanic crust. This scenario is also recognised on the new seismic data (see Figure 1) where Lower Cretaceous and Upper Jurassic play leads are depicted overlying a source kitchen on oceanic crust. 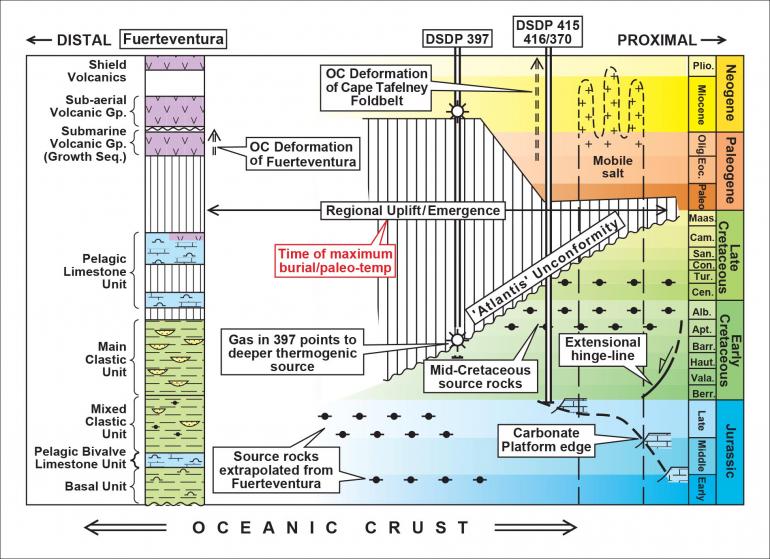 Figure 3: Chrono-stratigraphic Chart illustrating the key tectonic and depositional events in the geological history of the Moroccan Atlantic margin. Note the regionally-significant Base Tertiary (‘Atlantis’) Unconformity and the timing of oceanic crustal deformation of Fuerteventura and Cap Tafelney Foldbelt.

Another aspect of petroleum system timing is that Tertiary reservoirs are more likely to be charged by hydrocarbons migrating from deeper accumulations and the evidence of DSDP 397 is that this process is actively working. Seismic evidence suggests that hydrocarbons are seeping across the BTU on a widespread scale and charging available Tertiary reservoirs. In this way, a new Paleogene play has been identified along parts of the margin where large ‘drift-like’ carbonate accumulations display strong amplitude anomalies.

PSTM & PSDM data packages are available for this region, contact us to enquire.

In cooperation with: ONHYM, SRC