Several licenses have recently been awarded to international operators in areas offshore São Tomé and Príncipe, Gabon and Equatorial Guinea. And in 2019, licenses have been granted in the joint development zone between Nigeria and São Tomé and Príncipe. The Geoex MC3D data volumes are available in support of the ongoing Equatorial Guinea 2019 Oil & Gas Licensing Round.

Equatorial Guinea’s deep-water basin is highly prospective for oil and gas but remains largely unexplored by drilling. A series of five near-contiguous speculative 3D seismic surveys were carried out between 2011 and 2014 by Geoex, in conjunction with SAER Ltd., for the Ministry of Mines and Hydrocarbons, Equatorial Guinea (MMH) in order to promote exploration in this area.

Together these surveys extend over an area of approximately 7,900 km2, covering blocks EG-02, EG-05, EG-16, EG-17 and EG-18 (see Figure 1). A scoping interpretation of these data provides new insights into the regional geology and petroleum prospectivity of this deep-water basin. AVO-supported prospects are recognised in channel/fan systems in both Upper Cretaceous-Paleogene and Lower Miocene plays. The 3D seismic data illustrate the importance of the structural control imparted by reactivation of the oceanic crustal fabric. 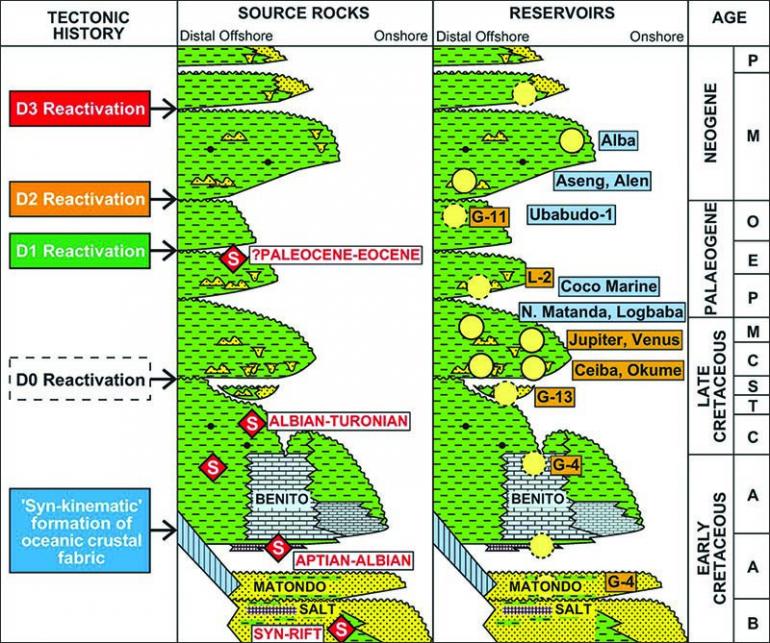 Figure 2: Stratigraphy and petroleum geology of the Douala-Rio Muni margin.

Geologically the area overlies the distal parts of the Douala and Rio Muni Basins situated on oceanic crust, here referred to as the Douala-Rio Muni margin. This region developed as an ‘oblique margin’ where oceanic crust is strongly offset continent-wards by oceanic transforms into relatively shallow water. Several gas condensate and oil discoveries have already been made in upper/middle fan reservoirs overlying oceanic crust. Source rocks for the recognised petroleum systems have been identified geochemically in the Upper Cretaceous and Paleogene section, while ‘live’ oil encountered in Tertiary sandstone cores from the Ubabudo-1 well drilled on the volcanic island of São Tomé has been geochemically linked to Middle-Upper Cretaceous source rocks (Figure 2).

The new Geoex 3D seismic data provide a near continuous coverage over the region between the islands and seamounts of the Cameroon Volcanic Line and the Douala-Rio Muni margin (see Figure 1). The data have imaged Miocene sand systems working southwards along the axis of the Douala Basin and Cretaceous-Paleogene sand systems migrating westwards out from the Rio Muni continental margin (Figures 3 and 4). The data also show basement structure reflecting the syn-kinematic fabric of oceanic crust in the form of spreading-ridge structures and oceanic fracture zones. Significant deformation of the overlying sedimentary section is observed, related to reactivation of basement structure during several tectonic episodes (Figure 2). This includes strong crustal uplift along fracture zones during the early Miocene which played a role in the formation of the volcanic islands and seamounts of the Cameroon Volcanic Line.

Figure 3: Amplitude response of an Aquitanian turbidite fan. Line of section shown in red on the map.

The combination of underlying structure and basin floor fan systems has contributed to enhanced trapping possibilities in the 3D area. Prospects have been delineated by combining structural mapping with the application of Amplitude Versus Offset/Angle (AVO/ AVA) techniques. Type II/III AVO anomalies (low acoustic impedance, high porosity hydrocarbon-filled sands) characterise several prospects which have been identified on the Geoex 3D data. Similar Type II/III AVO anomalies have proven successful in every discovery to date in the Douala Basin blocks O & I (Lower Miocene play) and in the Ceiba and Okume fields of the Rio Muni Basin (Upper Cretaceous play). Figures 3 and 4 show examples of amplitude extractions on Lower Miocene and Upper Cretaceous- Paleogene systems, which both exhibit AVO responses. SAER Ltd have produced five interpretation reports in cooperation with Geoex Ltd covering the blocks EG-02, EG-05, EG-16, EG-17 and EG-18 using the discussed 3D data. Scoping hydrocarbon volumes for 26 possible oil and gas prospects have been calculated in these reports.

*Source: From Lawrence et al. (2016) Deformation of oceanic crust in the eastern Gulf of Guinea: role in the evolution of the Cameroon Volcanic Line and influence on the petroleum endowment of the Douala-Rio Muni Basin. In: Sabato Ceraldi, T., Hodgkinson, R. A. & Backe, G. (eds) Petroleum Geoscience of the West Africa Margin. Geological Society, London, Special Publication, 438.