Three new play types based on a deep-basin Jurassic petroleum system offshore Atlantic Morocco have been identified, based on interpretation of new deepwater seismic data and information from DSDP boreholes.

This article summarises the interpretation of new regional 2D seismic data over deepwater offshore Atlantic Morocco combined with revised stratigraphic information from DSDP core-holes and new thermal history data from DSDP core samples. This is the first time that such methods have been applied in a deep-basin setting and the results have important implications for our understanding of regional tectonics and the workings of a deep-basin petroleum system.

Several hydrocarbon occurrences encountered in exploration wells and DSDP (Deep Sea Drilling Project) core-holes demonstrate a deep-basin petroleum system working along the Moroccan Atlantic margin (see Figure 1 for location). Some of the key occurrences are shown in their relative margin setting on a simplified chrono-stratigraphic diagram in Figure 2, demonstrating that kitchens for Jurassic and/or Lower Cretaceous source rocks must extend out into the deep-basin and over oceanic crust. 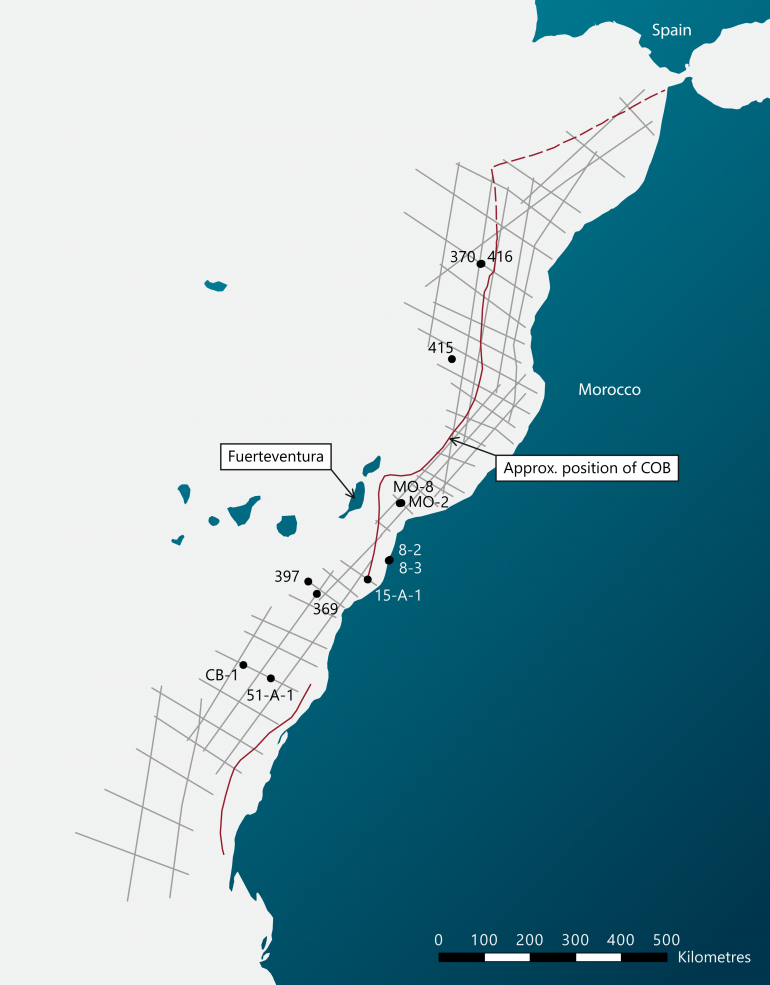 There is a paucity of source rock information in this setting from exploration or DSDP drilling, although distal well MZ-1 is reported to have encountered Lower Jurassic organic-rich mudstones (ORIs). More significantly, a window on the deep-basin section is provided by the Basal Complex exposed on the island of Fuerteventura of the Canary Islands. Here, steeply-dipping or overturned Jurassic – Lower Cretaceous sediments overlying oceanic pillow lavas form part of a major, northerly-verging fold-thrust structure. After subtracting the effects of contact metamorphism, geochemistry has indicated that there was an original source potential in the mudstones of the Middle/Upper Jurassic ‘Mixed Clastic Unit’. This is an approximately 450m thick sequence of Bathonian to Tithonian turbiditic-pelagic sediments and is depicted as a source interval in Figure 2. In addition, pelagic sediments immediately overlying the pillow lavas (probably Toarcian age) might also have had an original source potential. 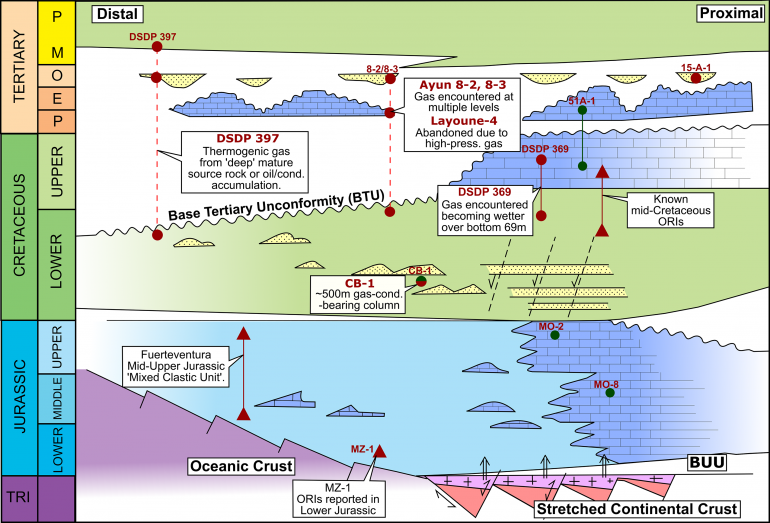 Although source intervals may be present in the distal Lower Cretaceous section, based on the evidence cited above we focus on a deep-basin petroleum system associated with Jurassic source rocks.

There is often a negative view of the exploration potential of sediments overlying oceanic crust due to uncertainties concerning source rock occurrence and thermal history. In the case of offshore Atlantic Morocco, the interpretation of super-regional 2D seismic data acquired and processed by Geoex in 2018 has provided new insights into how a deep-basin petroleum system has worked.

The new seismic data have allowed the recognition of a regional, truncational unconformity which is ubiquitous but more clearly observed in sedimentary section overlying oceanic crust (as shown in Figure 3). The seismic data tie directly to four DSDP core-holes (DSDP 370, 397, 415 and 416) that intersected the unconformity and were all drilled on oceanic crust. In these core-holes a wide stratigraphic age gap is recorded at the unconformity (~30-40 MY in DSDPs 415, 370 and 416; ~70 MY in DSDP 397) spanning the Cretaceous/Tertiary boundary. Since the oldest sediments overlying the unconformity have been dated as late Palaeocene in DSDPs 415, 416 and 370, we have designated it the Base Tertiary Unconformity (BTU). The truncation observed on the regional seismic data clearly demonstrates that it represents a period of widespread uplift and erosion. Mapping of the truncation/subcrop relationships below the unconformity across the dataset has provided an understanding of regional pre-BTU geometry and shows that the uplift and erosion is tectonic in origin. Long-wavelength/low-amplitude, slightly asymmetric, northward-verging folding or buckling is interpreted over the entire area of oceanic crust covered by the new seismic data. Two broad structural culminations have been identified and named; the ‘Canaries Anticline’ at the latitude of the Canary Islands and the ‘Coral Patch Anticline’ to the north. Our working hypothesis is that this structure evolved to form the Fuerteventura and Coral Patch Ridge thrust structures in the late Palaeogene to early Neogene. We correlate the tectonic events that have deformed oceanic crust with the onshore ‘Atlassic’ rift inversion events and therefore causally to the convergence of Africa and Eurasia beginning in the Late Cretaceous. 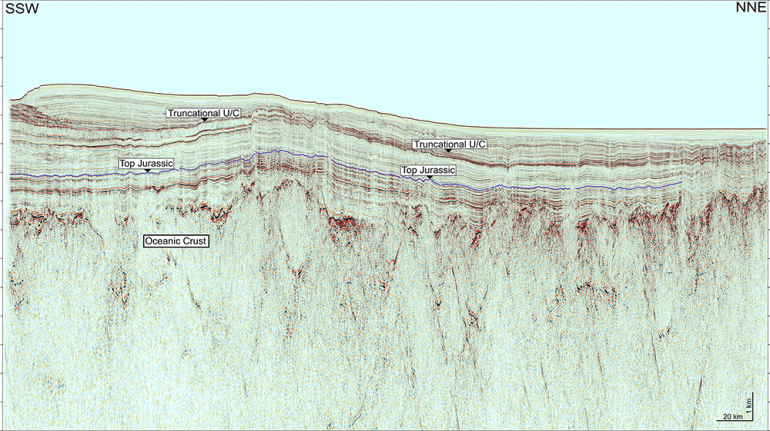 These tectonic episodes will have profoundly affected the way a deep-basin petroleum system will have worked. One aspect of this is the complication in the thermal history resulting from the uplift and erosion and therefore the missing section, represented at the BTU. To investigate this further we obtained new analytical thermal history data by sampling cores in DSDP core-holes 370, 415 and 416. Core samples were submitted to Geotrack International for vitrinite reflectance (VR) measurement and Apatite Fission Track Analysis (AFTA).

The combination of thermal history profiles (palaeo-temperature vs. depth plots) for DSDP core-holes 370, 415 and 416 provides some important observations on the palaeo-geothermal gradient and the amount of cooling. These in turn allow estimations of the amount of section missing due to erosion. The data show that the palaeo-geothermal gradient is in the range of ‘normal’ values and is not displaying the high values expected if the cooling was due to a variation in basal heat-flow (for example by the impact of a ‘Canary Island hotspot’). Rather, the cooling can be explained straightforwardly by the erosion of a missing section.

The combined VR and AFTA data are consistent with both the seismic interpretation and the stratigraphic data in indicating the erosion of a significant thickness of missing section at the BTU. In this way the new VR and AFTA data show that source rocks in the Jurassic and Cretaceous section (and extending over oceanic crust) will have reached a higher level of maturity than would be predicted if the additional burial is not recognised. The indicated pre-BTU levels of thermal maturity in the DSDP data effectively corroborate the occurrence of a deep-basin Jurassic petroleum system.

How the Deep-Basin Petroleum System Has Worked

This analysis has helped us to better understand how the deep-basin petroleum system has worked and is depicted schematically in Figure 4. The thermal history data have shown the magnitude of erosion (the missing section) at the BTU and that the Late Cretaceous/Palaeocene represents the time of maximum burial/palaeo-temperature over large areas (including over oceanic crust). It also therefore represents the timing of the end of the main-phase of hydrocarbon generation from Jurassic-Lower Cretaceous source rocks. This is designated ‘1st Phase Migration’ in Figure 4. The lack of recognition of the pre-BTU uplift and missing section would inevitably lead to an underestimation of maturity levels and the misinterpretation of the timing of optimum hydrocarbon expulsion, migration and charge across the deep-basin. It should also be noted that mid-Cretaceous source rocks, well-documented along the Moroccan Atlantic margin, are either missing due to erosion below the BTU or, if preserved, would not have become sufficiently mature for active hydrocarbon generation pre-uplift and erosion. 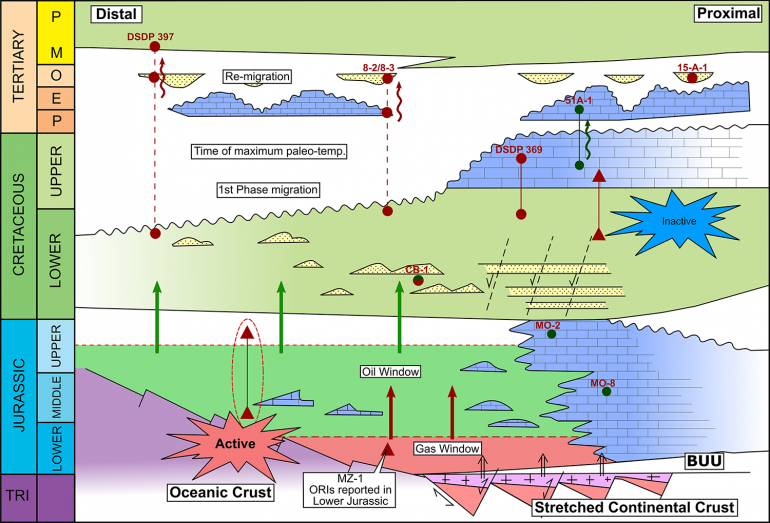 By using the palaeo-temperature profiles derived from the VR and AFTA data from DSDPs 370 and 416, the top oil window can be extrapolated to just below the total depth of DSDP 416 in the Upper Jurassic. North of the Canary Islands, we have used the previously described analysis as a guide to extrapolate pre-BTU maturity levels (oil and gas windows) across the deep-basin Atlantic margin between the edge of autochthonous salt (as a proxy for the continent-ocean boundary) and the limit of the Moroccan Exclusive Economic Zone. South of the Canary Islands we have used the results of 1D basin modelling of DSDP 397 (partially constrained by VR data), to extrapolate pre-BTU maturity levels. Results shows that oil and/or gas kitchens for Jurassic source rocks extend over large areas of deep-basin offshore Morocco (Figure 4).

Another aspect of petroleum system timing is that Tertiary reservoirs can only be charged by hydrocarbons re-migrating from deeper accumulations, DSDP 397 provides evidence that this process has actively worked to the present day. Seismic evidence, in the form of DHIs, suggests that hydrocarbons are seeping across the BTU on a widespread scale and charging Tertiary reservoirs where available. This process is designated re-migration in Figure 4.

Using the Geoex 2D seismic data and the source kitchen mapping described above, three new plays have been identified that have potentially been charged by the deep-basin Jurassic petroleum system. These plays are depicted in their relative margin setting in Figure 5 and have been categorised below according to the conditions of their charge and retention history related to timing of hydrocarbon generation and trap formation. 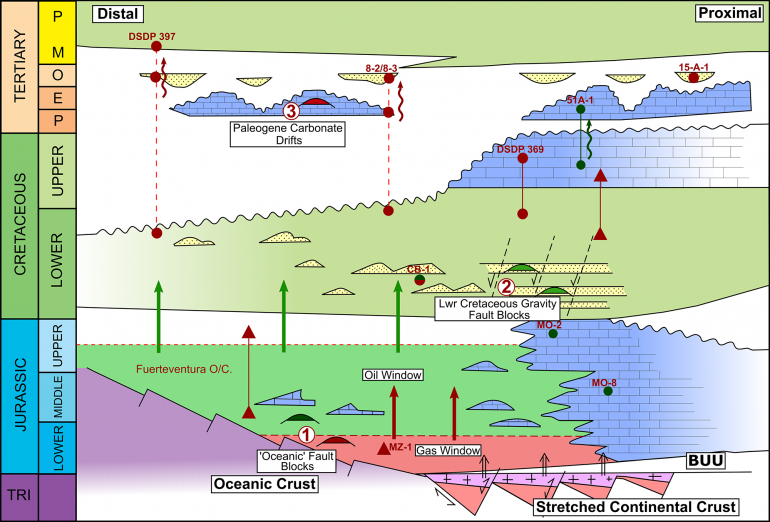 Plays charged by ‘1st Phase Migration’ and dependent on retention of hydrocarbons during later deformation.

Play-type 1: Oceanic Fault Blocks. Fault-block structures formed on oceanic crust at the spreading-axis, or by transform activity, during ultra-slow spreading in the early to mid-Jurassic (Figure 6). They are large structures draped by Jurassic sediments containing potential reservoirs in carbonate platform-derived calci-turbidites, as seen in the Jurassic section exposed on Fuerteventura. 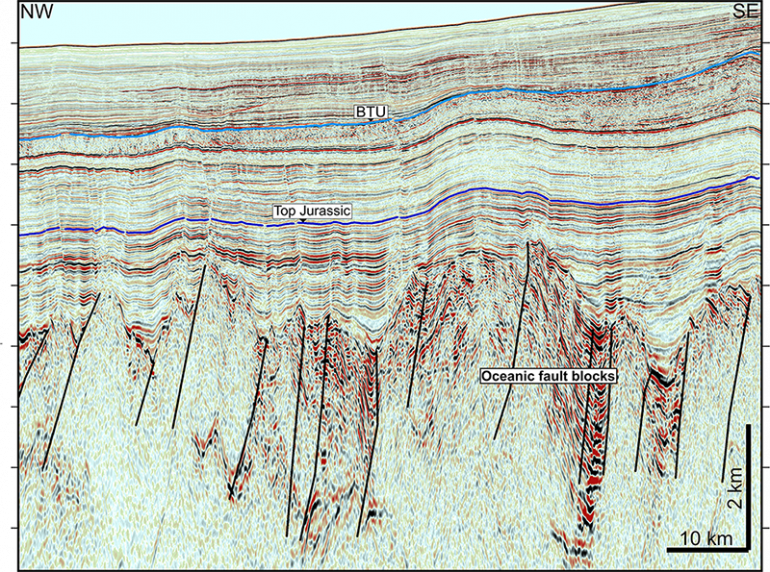 Play-type 2: Lower Cretaceous Gravity Fault Blocks. Tilted-blocks formed by early Cretaceous gravity-faulting (Figure 7A). The CB-1 discovery was drilled on a roll-over structure associated with this gravity-faulting. Target reservoirs are formed by syn-tectonic deltaic clastics, known from drilling and the exposed Lower Cretaceous section on Fuerteventura, but have not been drilled in this specific structural setting. DSDPs 370 and 416 also drilled clastic turbidites in the distal Lower Cretaceous section. The presence of hydrocarbons in this play is supported by significant seismic AVO anomalies.

Plays charged by re-migration across the BTU induced by Early-Mid Tertiary deformation.

Play-type 3: Palaeogene Carbonate Drifts. These are large depositional bodies developed above the BTU along the base of the palaeo-slope and thought to have formed by upwelling bottom currents re-working shelf-derived sediments (Figure 7B). Reservoirs are formed by re-worked micrites, bioclastics and phosphorites as demonstrated in coastal wells Layoune 8-2 and 8-3 where they are gas-bearing. Offshore, the seismic data display strong AVO anomalies indicating significant gas volumes.

Footnote: The stratigraphic and structural context of these plays are displayed in a series of 18 interpreted seismic profiles (selected from the Geoex 2018/19 regional 2D seismic survey), in the SRC/Geoex Morocco Atlantic Margin Atlas. Biostratigraphic revisions of selected DSDP core-holes and the newly-acquired thermal history data are documented in the SRC/IGI Oceanic Crust Exploration Project.